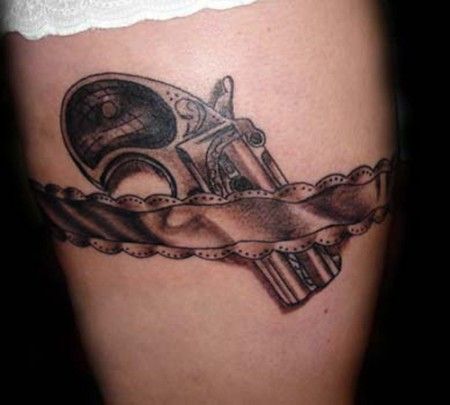 One of the most controversial designs that exist in this art due to all the negative connotations and meanings that are attributed to weapons (within clear political correctness). Death, destruction, violence are some of those negative connotations. For this reason, the people who usually wear this type of designs are very daring and transgressive on most occasions.

In the case of this article, we will not discuss the weapons themselves and the eternal debate on their use, but we will simply focus on what is attributed to them, being as objective as possible; Although if you want to know my opinion, I consider the option of tattooing a weapon, something risky and that is an element that is very directly related to a series of values ​​with which we have to accept that people can be contrary.

One of the meanings that are most attributed to these designs is the permanent state of alert in which people who get these types of tattoos live. On the one hand, there are those people who are in this state for no apparent reason and, on the other hand, there is a group of people who tattoo weapons due to this permanent state of alert that has its origin in a complicated past, in which they have had to fight to move on and this type of tattoos can show your ability to overcome and not let yourself be stepped on by other people.

Other groups of people, fans of the old west and the stories of Indians and cowboys, are where we can find this type of designs. In this case, we can see that he is not related to a person interested in violence or war, but has simply decided to tattoo an element related to the world of the old west or because of his taste for the time or for the society of that time or for whatever reason.

When we think of weapon designs, we quickly have a collective imagination and within it the ideas of weapons represented realistically, with shading and with realistic sizes and proportions. However, we can also see other designs that refer to video games or in a more comical way, which perhaps take away some of the risk from the matter of having an element like these tattooed.

Apart from the meanings by which the person is tattooed a weapon, it can also tell us a lot about his personality, since tattooing this type of elements will almost certainly create later conflicts and the person who carries them must have solid arguments before who asks why tattoo a gun. This shows us that the type of people who choose to get a gun tattoo will be a type of people who trust themselves and their criteria and who must be strong and not be influenced by what other people say or think about them. or she.

In summary, these types of designs are very controversial, so the person who tattoos it has to be very sure, even more than with any other design, since it can be a design that causes different reactions from people who can. observe.

If what you want is a tattoo whose main element is a weapon, this is your gallery.

Pistol that pretends to be trapped with a garter belt. Very sexy and a design that girls choose with relative assiduity.

Rifle that covers the entire forearm.

Woman with a gun in her hand. Very realistic tattoo and perfect quality.

We have already seen something similar to this before. A pistol held by a garter belt. A good idea for women.

Gun on the back of a man’s foot.

Original design of a weapon that covers the arm and fingers.

A place that women also choose a lot for this type of designs is the belly at the height of the hips, to simulate that the pistols are half covered with clothing.

Another new pistol design in women.

Two crossed guns with a message on top.

Small and on a girl’s torso.

This girl has also chosen the hip like others we have seen before, the difference in this case is that she has added colored inks to the design.

It originates a design that forms a pistol with all the fingers of the hand.

Gun across the forearm and a message below in an unknown language.

Very realistic tattoo with a gun and bullets.

Large decorated with colors that occupy the entire arm.

Original tattoo that covers the entire head of this boy.

Simple design on the leg.

Tattoo on the forearm.

A weapon in a very original place: the palm of the hand.

Pistol that simulates being in its holster.

Magnificent for the quality of the design and how well used the colors are in it. The garter belt is very realistic and beautiful.

Attractive girl with a large revolver in the side.

Guns tattooed symmetrically on both sides of the back with a symbol in the center.

Huge and covering the entire side.

Two pistols cross over a heart filled with animal print.

Some designs of this type occupy large parts of the body.

This type uses strategic areas of the body to simulate being real weapons.

More weapons in the arm of men.

Chest of a woman decorated with roses and a message in English.

Weapon that shoots a flag with a caravel on the inside of the arm.

Photo of a boy showing a real gun and his tattoo. 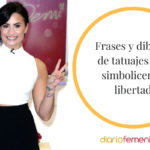 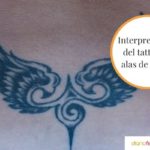