Everyone knows that there is no more outrageous celebrity than Justin Bieber. He does not finish leaving one problem to get into another, but, despite this, many people have a deep affection for him. In addition, we cannot deny that the young Canadian has talent, and knows how to captivate the public with his voice and his charisma.

Justin officially began his musical career in 2009 but managed to conquer all the teenage girls in the world in 2010 with the music video for Baby. Since that time, thousands of situations have happened; from hits, awards, sold-out concerts around the world, money, to the worst scandals imaginable.

But, despite everything that happened in the last ten years, his fans are still there to support him in all his projects.

What is the meaning of Justin Bieber tattoos?

Many people go to the studio to be able to chat with the artists who work there, and so help them decide what would be the best tattoo to get, since they have no idea what they want on their skin. Sometimes they go for a design without knowing its meaning, but that’s not the case with Justin. Each tattoo that the singer has on his body has a special meaning.

Examples of Justin Bieber tattoos and their respective meanings

1. Bird tattoo on the hip

Justin Bieber has a tattoo that reflects a seagull in flight and is located on the side of his hip. The singer has told in innumerable interviews that this design was made in his country in 2010, when he turned sixteen.

That particular seagull tattoo is representative for the Bieber family, since most of its members have tattooed it on different parts of the body. For them it symbolizes flying and learning how to handle life.

In 2012, when it was still terrible for his fans to see his idol get tattoos, Justin got an interesting crown design on his chest. Crowns represent leadership, wealth, and elegance.

Justin Bieber has a few roses tattooed on his body. Those flowers represent commitment, faith, hope and starting from scratch. But, if these roses have thorns, it can symbolize defense, pain, loss.

Everyone knows that Justin Bieber has a lot of love for his mother, and that she means everything to him. For this reason, the singer tattooed his mother’s date of birth in Roman numerals.

When Justin Bieber was madly in love with his then-girlfriend, Selena Gomez, he got an almost exact tattoo of the singer. The image was taken from a photograph that appeared in Elle magazine. Currently, Justin has tried to cover up that tattoo with shadows, but was unsuccessful as we all know who it was dedicated to. 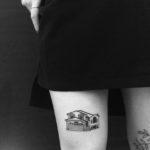